Dysprosium (Dy), or Dysprosium Oxide more specifically, is set to play an important role in renewable energy, due to its ability to resist demagnetization in rare earth permanent magnet applications. These types of magnets are widely used in motors, electric vehicles, generators, wind turbines, and data storage applications. Roskill estimates that rare earth permanent magnet applications represented 29% of total rare earth element (REE) demand in 2020, and expects them to consume around 40% of rare earth demand by 2030. The global climate consensus and efforts to reduce greenhouse gas emissions are likely to continue to drive demand for metals such as dysprosium that are critical in the development and adoption of low-emission technologies.

REE are used in many components in many products and sectors; the figure below provides examples. Components and products that contain REE include catalysts (for use in oil refineries and automobiles), permanent magnets (for use in cell phones, wind turbines, and electric vehicle motors), fiber optics (for use in signal amplifiers and lasers), and lighting/displays (for use in fluorescent lights, cell phone screens, and computer displays).

Over 90% of all electric vehicles produced to date use permanent magnet traction motors containing neodymium-iron-boron (NdFeB) magnets, which in turn contain the critical rare earth elements Neodymium, Praseodymium, Dysprosium, and Terbium. Additionally, electric vehicles contain dozens of micromotors, sensors and speakers powered by NdFeB magnets, which help reduce vehicle weight and thereby increase range. Each electric vehicle contains roughly 100 grams of dysprosium.The rising use of NdFeB magnets in electric vehicles, alongside a growing list of other end uses and applications, is reflected in strong forecast demand growth for rare earth minerals in the years ahead.

Dysprosium in Terfenol-D, is used to produce sonar sensors, positioning actuators, active noise and vibration cancellation, seismic waves, and tool machining.
Dysprosium phosphide (DyP) is a semiconductor used in laser diodes and high-power, high-frequency applications.
A dysprosium additive to neodymium-iron-boron magnets increases the operating temperature range for use in hybrid and electric vehicles.
Dysprosium oxide in a cermet is used in nuclear reactor control rods to control the fission process.
Dysprosium-165 is injected into joints in the body to treat rheumatoid arthritis.
Dysprosium is also used in Radiation badges to detect and monitor radiation exposure and coating compact disks (CD) for digital data, music, and video storage.

China has been very successful in developing REE resources abroad, leading to concerns it could establish a stranglehold over supply, creating security concerns for other countries. In response, the US is also looking at joining forces with other countries to stockpile and develop REE sources.

There are important deposits of rare earth elements in Greenland. Significant deposits were discovered in Japan’s far eastern territorial waters, although underwater mining is a difficult process, so they may take time to extract. There are also deposits of REE in Brazil. Japan and the US in particular are developing ways of mining and extracting them without inflicting environmental damage. It seems possible that the US, Brazil and Japan could work together to develop alternative sources and ensure China is not a monopsony.

The only fully integrated producer outside of China that produces REE oxides is Lynas Rare Earths. Its concentrate is mined in Australia, and processed at a plant in Malaysia. However, all heavy REE oxide production (including dysprosium) is done in China. China’s dominance in the rare earths industry has long been of concern, and since mid-2019 the US, Russian, EU, and Japanese governments have adopted strategies to reduce dependency on Chinese supplies. The impact of the Covid-19 pandemic in 2020 further highlighted the dependency of REE consumers outside China on Chinese-derived supply.

According to the International Energy Agency, analysis of REE project pipelines indicates that the geographical concentration of production is likely to change in the near term. Australia and the United States are likely to increase their global market share of rare earths, including dysprosium. 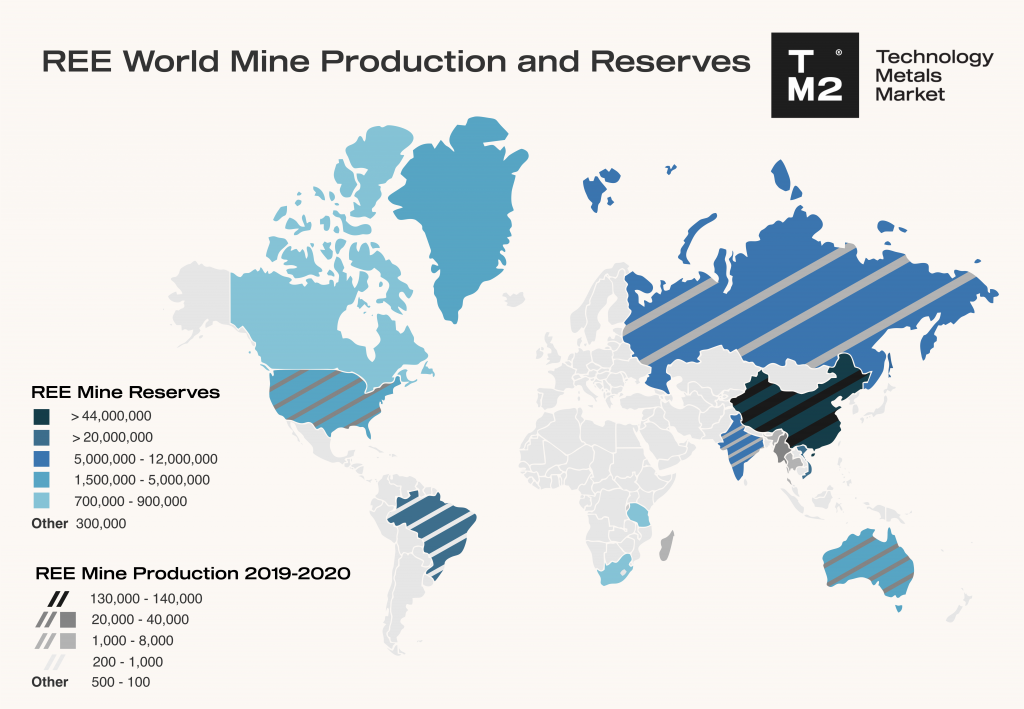 For most of 2020, Dysprosium oxide was range-bound at $320-360/kg. But it has seen a rapid rise since December 2020, with prices reaching over $600/kg in May 2021, joining the rally for many other EV battery metals. The Mining.com EV Metal Index, which tracks the value of battery metals in newly registered passenger EVs (including hybrids) around the world, set a fresh monthly record of US$512.2bn in December, eclipsing the previous record and doubling from a year previously. The final month of the year always sees a rush of car registrations, but in December 2020 they recorded six times the monthly rate in 2017, testament to the rapid growth of the industry. After lagging 2019 for most of the year due to Covid-19 disruptions, 2020 ended 23% ahead, with US$2.64bn worth of battery metals finding its way into new cars.

Dysprosium is an important part of every EV, and the price is constantly responding to the increasing share of EVs in the world. Global electric car sales defied Covid-19 in 2020. Backed by existing policy support and additional stimulus measures, the IEA preliminary estimate is that electric car sales worldwide climbed to over 3 million and reached a market share of over 4%, making 2020 a record-breaking year for electric mobility. This is equivalent to global sales growing over 40% from the 2.1 million electric cars sold in 2019, and marks a return to the double-digit rates observed in 2010-18. As a result, there are now more than 10 million electric cars on the road globally. 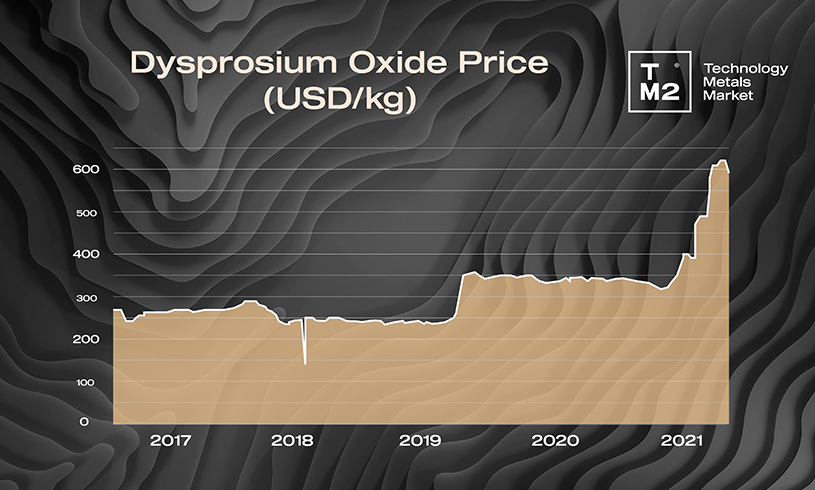 With total magnet rare earth oxide demand forecast to increase at a CAGR of 9.7%, and prices projected to increase at CAGRs of 5.6-9.9% over the same period, Adamas Intelligence forecasts that the value of global magnet rare earth oxide consumption will rise five-fold by 2030, from US$2.98bn this year to US$15.65bn at the end of the decade. Constrained by an expected undersupply of neodymium, praseodymium and dysprosium oxide from 2022 onward, Adamas Intelligence forecasts that global shortages of NdFeB alloy and powder will amount to 48,000 tonnes annually by 2030 – roughly the amount needed for 25-30 million electric vehicle traction motors.

Adamas Intelligence forecasts that passenger EV traction motors, commercial EV traction motors and other e-mobility motors, such as electric bicycles, motorcycles, and scooters, will collectively be responsible for 23% of total global demand for NdFeB alloys and powders by 2030. Considering the additional uses of NdFeB magnets in EVs, including micromotors, sensors and speakers, EVs could consume one out of every four tonnes of NdFeB alloy and powder produced globally in 2030. IndustryARC forecasts the Dysprosium market to reach US$756m by 2025, implying a 2020-25 CAGR of 5.8%. Express Wire estimates the global NdFeB market at US$5,970m in 2020, and expects it to reach US$7,309m by the end of 2026, a 2021-26 CAGR of 2.9%.