Palladium is a grey-white Platinum Group Metal (PGM) that is very ductile and malleable. This PGM is the most valuable of the four major precious metals. A key component in pollution-control devices for cars and trucks, the metal’s price has doubled since May 2019, making it more expensive than gold. Over half of the supply of palladium and its cousin platinum goes into catalytic converters along with 80% of rhodium produced and help convert up to 90% of harmful gases from auto exhaust (hydrocarbons, carbon monoxide, and nitrogen dioxide) into less-harmful substances (nitrogen, carbon dioxide and water vapor). Palladium is also used in electronics, dentistry, medicine, chemical applications, groundwater treatment and jewelry. Palladium plays a key role in fuel cell technology, which combines hydrogen and oxygen to produce electricity, heat, and water.

Based on end-use, the key end palladium markets can be presented as chemicals, oil and gas, electronics, automotive, and others. In chemicals, palladium is used as a homogeneous catalyst for highly selective chemical transformations. Large numbers of carbon-carbon bonding reactions are carried out with the help of palladium compound catalyst. Palladium helps accelerate heterogeneous catalytic processes such as dehydrogenation, hydrogenation, and petroleum cracking in the oil and gas industry. Electronics is anticipated to be a key end-use segment of the palladium market. Palladium is used in multilayer ceramic capacitors, which consist of palladium electrodes found in laptops, computers, and mobile phones. Palladium is employed in connector and component plating in consumer electronics. It is extensively used in catalytic converters in automotive. Other end-use applications include jewelry, dentistry, and photography.

Palladium mine production in 2020 was estimated to be 210,000 kilograms which is a decrease of about 8% from 2019. This was mainly due to the closure of mines and other factors related to the Covid-19 pandemic. Russia and South Africa are by far the biggest Palladium producers and account for more than 75% of the overall production. The United States, Canada and Zimbabwe also have mines that produce substantial quantities of palladium. When it comes to reserves for PGMs, the Bushveld Complex in South Africa holds the biggest reserves by far .

According to the Nornickel Commodity Market Overview, industrial palladium consumption decreased by 43 tonnes (–14%) yoy to 302 tonnes in 2020. In the automotive industry the need for palladium in catalytic converters accounts for the major part of total palladium use . Such converters are legally required to be installed on all motor vehicles for reducing pollution. Due to its unique catalytic properties ensuring effective chemical reactions throughout the entire vehicle life cycle, there are almost no alternatives to palladium in this sector except for platinum, which is used mostly in diesel vehicles, and rhodium. In 2020, palladium use in the automotive industry decreased by 40 tonnes due to COVID-19 and the subsequent halts in business activity across the globe. In spring 2020, most automakers had to suspend operations, while dealers stopped selling.

Palladium consumption in the electronics industry remained unchanged at 23 tonnes in 2020. According to the Nornickel Commodity Market Overview, the use of palladium in multi-layer ceramic capacitors has declined in recent years. Given the metals price inelasticity of demand, consumption in these sectors is expected to remain flat. However, transition to 5G telecoms networks will lead to stronger palladium demand in the future.

In 2020, jewellery related consumption of palladium decreased by another 1.5 tonne. A drop in Chinese demand for jewellery amidst a general slowdown in consumer spending and a consumer shift to other luxury goods were the primary cause of the continued sales decline.

In 2020, primary refined palladium production decreased by 10% yoy to 200 tonnes. In Russia, the leading palladium producing country, palladium output decreased by 3 tonnes due to a high base effect from 2019, when the Krasnoyarsk Precious Metals Refinery (Krastsvetmet) processed Nornickel’s work-in-progress inventories that had been built up previously. South Africa, the world’s second largest producer, also demonstrated a decrease (– 19 tonnes) in refined palladium output due to the COVID-19 nationwide lockdown and operational issues at Anglo American Platinum’s pyrometallurgical facilities.

Despite price volatility in the first half of 2020, palladium chalked up further gains over the year. Early in 2020, palladium maintained its price momentum from the second half of 2019 amid high demand and metal shortages on the spot market, hitting an all-time high of US$ 2,795/oz on 28 February. After reaching this level, palladium plummeted by almost 45% in March amid a global pandemic and the automotive industry virtually grinding to a halt. However, the price plunge was followed by an equally fast price surge , supported by a faster than expected world economic recovery. Since 2010, there has been a sustained undersupply in the physical palladium market which has been covered by inventories accumulated in previous years. In 2020, the palladium supply deficit was fully offset by drawdown of consumers’ strategic stocks on lower demand and uncertainty caused by the pandemic and lower ETF inventories.

The palladium price was further bolstered by a weaker US dollar and negative real yields of treasury bills in key countries stemming from extraordinary monetary and fiscal measures taken by central banks and governments across the world to counter the economic effects of the pandemic. By the end of 2020, palladium price stabilized between US$ 2,315/oz and US$ 2,350/oz. Average annual net speculative positions dropped 71% to 10 tonnes on the New York Mercantile Exchange (NYMEX). In May 2021, the palladium price reached a high of US$ 2890/oz but had decreased to 2492/oz in June 2021. 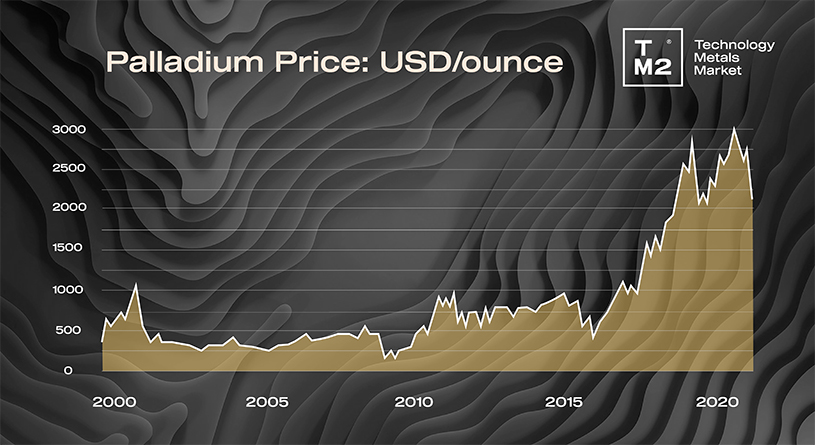 Palladium demand is highly concentrated in automotive uses, with about 84% of yearly demand coming from auto production. Demand from the automotive sector has been growing in recent years due to tightening legislation on emissions in Europe and China. Most of the world’s palladium supply is used in vehicles’ catalytic converters to control exhaust emissions. Therefore, the increased demand has contributed to the increase in palladium prices. As climate change is becoming an increasingly serious issue, vehicle manufacturers are shifting towards more sustainable, environmentally sound designs with the launch of new electric vehicle (EV) ranges. Still, a full EV-only market will take years to implement. Meanwhile, palladium is used in hybrid vehicles, which are enjoying growing demand. The year-over-year gains that have been seen in the palladium market are also the result of broader economic peaks and valleys. After losing over 49% in 2008 during the recession, palladium prices recovered in-line with the global economy.

In 2020, the COVID-19 pandemic negatively impacted auto production, pushing overall manufacturing down about 15% for the year. Global auto demand, however, is expected to make a significant rebound in 2021. The latest forecasts have auto production up about 9% for 2021, and that growth is reflected in higher palladium prices. As the post-COVID auto rebound takes hold, the big-picture trends for palladium are gaining momentum. As long as auto demand is stable, palladium demand is likely to remain robust. The global push for cleaner emissions standards is driving palladium loadings ever higher on European and U.S. gasoline vehicles. Stricter environmental regulations in Europe, North America and China are the key factors.

Russian metals miner Nornickel expects the deficit in the global palladium market to widen in 2021 due to flooding at its mines and an accident at its plant earlier this year. The world’s largest palladium producer plans to partly compensate for the deficit from its stockpiles left from 2020, it said in a statement, adding that its Global Palladium Fund could also provide metal if there was a need to do so. Nornickel currently expects a global palladium deficit at 0.9 million troy ounces in 2021, up from 0.3 million ounces in 2020. It previously expected the deficit to be at 0.2 million ounces this year. Speaking to Bloomberg in April, Tai Wong, BMO Capital Markets’ head of metals derivatives commented: “It’s a confluence of factors that’s driving palladium. Fundamentally, there’s going to be a material deficit this year and automakers need to restock.”